Horse of the Century in Trinidad & Tobago - Unopposed.

Mentone owned by Mr. M.E.R. Bourne of Barbados has been named the 'Horse of The Century' by a panel of racing personalities appointed by the Trinidad & Tobago Racing Authority.

Mentone was bred by Mr. J. T. Kindon in Great Britain in 1956, by Pink Flower out of Favilla.  Imported into the Caribbean in mid 1959; Mentone made his debut at
the 1959 Christmas Meeting and promptly set the turf on fire winning the Governor's Cup by 3-1/2 lengths over Blue Stream in a new track record of 1.56 for the
9 furlongs and 100 yards trip.  Six days later Mentone with a 7lb penalty took the Stewards Cup, defeating Westend by 1-1/2 lengths, also in a new record time of
1.11-4/5 for 6 furlongs.  The Bourne standard bearer raced for exactly one full year from Christmas 1959 to Christmas 1960, facing the starter on 18 occasions,
passing the post in front 15 times, but was disqualified twice.

Mentone actually won 7 (officially) of his 12 starts in Trinidad, and 6 from 6 in Barbados.

Mentone won the Governor's Cup and Stewards Cup at the 1959 Christmas Meeting and Texaco Plate, Queen Elizabeth Stakes at the 1960 Easter Meeting, the
only horse in history to win these four prestige races at the same race meetings.

Very few of us were around at the turn of this century when the new Turf Authority, the Trinidad Turf Club assumed control as the regulatory body for horse
racing in Trinidad & Tobago in 1897, while themselves a major promoter, a role played out for 79 years. 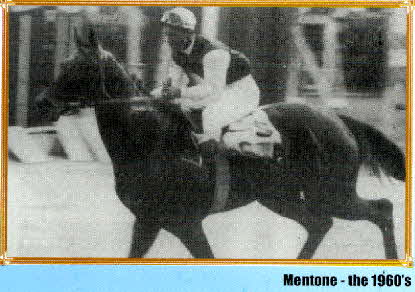 Hardly any of us until be around in the year 21 00, and certainly none in the third millennium however most,
if not all of us are eagerly anticipating the promises of hope for the future of racing as the new century
unfolds. Horse racing activity has existed in Trinidad & Tobago since the early 1800's, however records are sketchy of the equine stars which raced during this period, indeed statistics have only been properly
documented from the mid 1940's, with such stalwarts as George Marecheau, A. W Smith, Trevor Gale,
Richard 'Dick' Murray, Tony Williams, Leroy 'Fathead' Williams, Sir Michael Stoute, C. A. Christopher, Hugh
Mc David, and more recently Mike Goddard, and Derek Cozier, whose inspired writings through published
works on racing, either personally, or in international publications such as the now defunct Annual Bloodstock Breeders Review.

Sadly, publications the likes of 'A Review of Racing in Trinidad'; 'Racing Hoofs'; 'The Thoroughbred Digest';
various interesting and informative works of Christopher, are no more, however the Trinidad & Tobago
Racing Review, which was published by the Trinidad Turf Club from 1950 as the Annual Racing Guide is still
in existence today, thanks to the Trinidad Tobago Racing Authority, which assumed the role of Turf
Authority in 1976. It is to the credit of the Trinidad & Tobago Racing Authority, that a 'Horse of the
Century' from

1900 - 1999, as well as 'Horse of Each Decade' have been name for posterity, it being the Authority's wish to immortalize THE Horse, which is considered to be
the 'mostest' equine star, as well as those whose exploits on the track have captivated the imagination of all racefans, and indeed non-racefans alike, during their
reign. Any comparison of horses from different eras is always a very difficult task, and especially after 100 years, as the memories of earlier heroes fade with
time. The final selection of the winners and ultimate 'Horse of The Century' was placed in the capable hands of a Committee made up of professionals who have
been involved in local horse-racing, collectively for over a century. Their choices of the best of the decades of the 20th century is now history

1900 – 1909
SAYLOR
He defended the honour of the local turf in the early days of the 20th century, and his battles with Barbadian based Champion Houghton brought thousands of
fans to the tracks.  He won the Governors Cup in 1908.  In 1911 he finally defeated Houghton in the Coronation Plate, in a new track record, which provoked a
Carnival style jump up through the Streets of Port of Spain, and was the subject of a song 'You cannot beat the Saylor Boy!

1910 - 1919
TAKE A LIGHT
A household name in or around 1916, the son of Quickmatch quickly climbed the meteoric ladder to fame, being accepted as the undisputed Champion among the
best horses racing then.  A Story is told of his standing at the post quite often, would then start, catch his opponents in the last three furlongs and romp home
several lengths ahead.  He won the Trinidad Derby in 1916, and was finally sold to a group of Sportsmen in Venezuela.

1920 – 1929
KITTY GILL
A great half-bred, and reputedly the winner of a fantastic 83 races locally between 1922 – 1926, then subsequently sent to race in Panama.  Bred in Tobago,
Kitty Gill raced and won against the imported horses of the period.

1930 – 1939
TOM PEARSON
In 1930, Tom Pearson and Teresita became the favorites among racefans.  In 1930 however, Tom Pearson is recorded as having won 23 races alone,
valued $12,000. and was the holder of the track record for a mile & 130 yards at the Queen's Park Savannah, which was subsequently broken by Brown Bomber.

He won the Governor's Cup in 1930, and is well known as the Sire of Ras Taffare; himself a top creole.

Winner of 11 of 31 starts, Airofaith was campaigned locally by Harold Thavenot of Beheaded fame.

1960 – 1969
MENTONE (Horse of the Century)
Considered by many as the greatest imported ever to grace the 'Turf' in the Southern Caribbean. In a career spanning just one year, from Christmas 1959 – 1960, Mentone actually won 15 of his 18 starts (9 of them consecutively) but was disqualified twice (including his 7th win).  He won the Governor's Cup and Stewards Cup
on his first two appearances at the 1959 Christmas Meeting, the first horse to complete this historic double. He also won the Queen Elizabeth Stakes,
Texaco Plate and Trinidad Turf Club Cup, as well as several races in Barbados. He also set several track records at the time. He was a moderate sire at stud;
his best progeny being Debonair and Sit Tight.

1970 – 1979
AQUARIUS
Dubbed the 'Wonder filly' by racefans; Dr. George Oliver David Busby & Herman Lee King's bay filly Aquarius, raced on no less than 33 occasions, and was ridden to victory by no less than nine different riders at age 2 & 3, and by neither of the top two of the day Chally Jones or Venice Richards. That she won 13 of her
efforts, from F to A Class, is proof positive of the class of the bay daughter of Shingle Beach/Miss Anita, the only foal to race locally from this mare, although
very successful subsequently in Venezuela.

Aquarius was Champion 2 year old of 1971 with victories in the Nursery Stakes and Breeders Stakes, and Champion again at 3, when taking the Easter Guineas,
Barclays Bank Stakes, Derby Stakes and the Sir Lennox O'Reilly Handicap for the A & Lower class, the final event of the T.T.C. Christmas Meeting, during which
she faced the starter on 6 occasions.

1980 – 1989
ROYAL COLOURS
Comparisons have been made between Royal Colours and Jetsam who raced some 35 years earlier. A winner of 11 races from 30 starts; Royal Colours won the
Easter Guineas, Trial Stakes and Derby Stakes in 1982, the year before official sanction was given to these races forming the Triple Crown. He almost provided
T & T with a victory in the Clasico Del Caribe in December 1982. At 4, Royal Colours was at his pinnacle, with victories in the President's Easter Trophy, and
International Trust Caribbean Stakes, defeating the best from Barbados, Martinique and the Dominican Republic. He had earlier that season run a creditable 2nd
in the Cockspur Gold Cup in Barbados.

Sian's Gold holds three (one jointly) track records which still stand today, and is the first horse to cross the 1,000,000 mark for cumulative earnings when taking
into account her two placings in Barbados and Jamaica.

Back to Special Archive